No trip for me is complete without visiting a cathedral or two. In this post you’ll find select pictures of stained glass, the inside of St. Cecile, and artifacts from the Musee des Augustins.

The first two pictures were taken inside a church in Carcassonne. The design is reminiscent of Notre Dame.

This next group was taken inside the cathedral of St. Cecile in Albi. This first picture shows the ceiling of St. Cecile. The vault is nearly 100 meters long and 20 meters wide. The blue and gold painting is considered a “biblical encyclopedia” and was created by Italian painters from Bologna. These paintings have never been restored.  Below the pipes from the organ is a painting of The Last Judgment. This painting was created at the end of the 15th century. 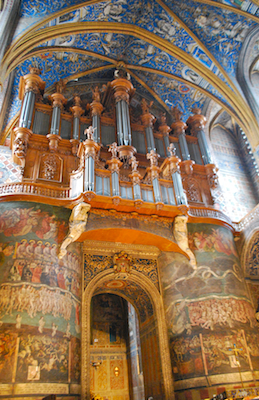 End Times or The Last Judgement 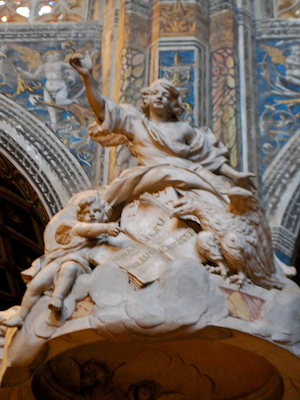 In Toulouse, Dayle recommended we visit the Musee des Augustins. The Musee des Augustin is the former Augustine monastery which dates from the 14th and 15th centuries. It is an example of southern Gothic architecture and contains over 4,000 works of art. Cameras were not allowed inside the museum. The pictures below were taken with my iPhone.

The sculpture above was rather intimidating. Notice the shadow of the cross behind the big guy? That extends out of range of this picture. You’ll see him holding the base of the cross in his left hand. I think he could’ve crushed us with his right hand. No wonder people were fearful of the church.

An epigraph is an inscription, such as found on a statue or building or wall. The Musee des Augustin had an entire wall display of epigraphys from various religious buildings. I did not, however, find a tablet of the 10 commandments. 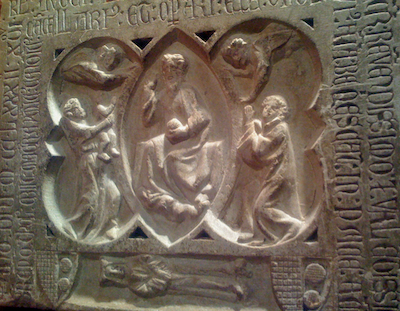 This last picture is one of my favorite pieces at the Musee des Augustin.  Our Lady of Grace was created by an anonymous French artist in 1450. This sculpture has recently undergone restoration to bring back the original colors.

Our Lady of Grasse