Saturday was still a bit windy but at least the rain had stopped.  We decided to venture over to the West End in the morning and purchase tickets for a show that evening.  In the West End you’ll find several discount ticket sellers along with a couple of casinos, clubs, theatres (movie and stage), Chinatown, and numerous stores.  It is always a hub of activity.

After purchasing our tickets, we decided to visit the Tate Modern and Shakespeare’s Globe Theatre.  Both venues are located across the Thames which meant a trip on the Tube.

I can’t help but be impressed with the mass transit system in England and Europe in general.  Here people are accustomed to taking mass transit.  Now the natives may disagree with me but every time we’ve visited Europe and ridden the subways we always find them to be clean, well-labeled, efficient, and with good PA systems.

We visited Tate Modern first.  There are four Tate museums; the Tate Modern, the Tate Britian, the Tate Liverpool, and the Tate St Ives.  Tate Modern is located in a former power station and was opened in 2000.  It displays the national collection of international modern art (defined as art created since 1900.)

In the late 50’s Rothko was commissioned to paint murals (600 square feet of paintings) for the Four Seasons restaurant in the Seagram Building in New York.  It is unclear what caused Rothko’s change of heart but he dissolved his commission agreement with the Four Seasons and bequeathed the paintings to the Tate Modern as a gift in the late 60’s.  Ironically, the paintings arrived at Tate Modern on the morning that Rothko committed suicide in 1970.

Tate Modern is the first museum of modern art that I’ve visited.  I haven’t even been to the ICA in Boston.  Modern art is an art form that I don’t always understand (if I’m really supposed to understand it) and isn’t something that I’m typically attracted to; however, as it has been pointed out, art is something that often causes a reaction in people on some level.  We don’t have to “get it” but we can certainly respect and appreciate the artist’s ability to express themselves, especially when the art makes us think.

With that, I bring you an installation by Doris Salcedo.  Ms. Salcedo is a Columbian artist.  And this is Shibboleth. 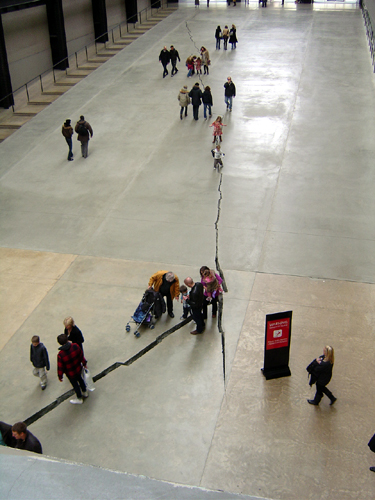 The “crack” in the ground ran the full length of the floor in Turbine Hall.

Shibboleth is “a word used as a test for detecting people from another district or country by their pronunciation; a word or sound very difficult for foreigners to pronounce correctly.”  It is a way of separating one people from another.  The word itself goes back to an incident in the Bible (Book of Judges) and was used to distinguish between the Ephramites and their enemies, the Gileadites.  Those who could not pronounce the word shibboleth were captured and executed.  A shibboleth is, therefore, a token of power.

According to Salcedo, “modernity is seen as an exclusively European event…and had as its main purpose the creation of a homogenous, rational, and beautiful society” and through its advocacy it created an “ideal of humanity so restrictedly defined that it excluded non-European peoples from the human genre.”

At the Tate we also visited two exhibitions: a retrospective by sculptor Juan Munoz and a collection of work by Duchamp, Man Ray, and Picabia. 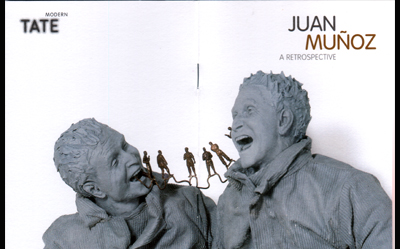 Yes, there was a child in a stroller beneath this pile of coats.

Even the food at the Tate had a modern presentation.

After a while, all this art started to overload our heads.  That is when we decide to head over to Shakespeare’s Globe Theatre and visit the master of another art form: the spoken word.

The Globe Theatre is a reconstruction of the open-air playhouse designed in 1599 where Shakespeare worked and for which he wrote many of his plays.  Here you can take a self-guided tour of an indoor exhibit which introduces you to the life of Shakespeare, London during his lifetime, and the theatre.  This is followed by a tour of the theatre with a well-trained guide.  The theatre season runs from April to October. 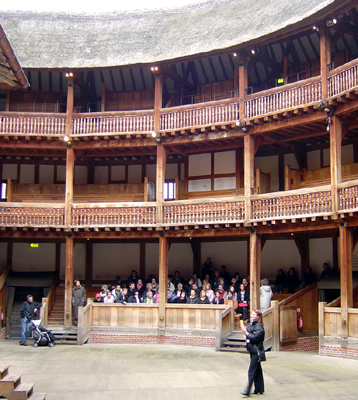 The iron gate outside the Globe Theatre.

We finished our evening with an awesome dinner at an Italian restaurant in the West End.  I truly expected the staff to start singing at some point; they were so exhuberant.  Dinner was followed by a visit to the Palace Theatre to see Monty Python’s Spamalot.  What better place to experience Monty Python than in London’s West End.

Next: Covent Garden, Victoria & Albert Museum, and a concert at the Royal Albert Hall.

Hi Fellow Life Travelers! I'm Amy Crawley
I paint pictures inspired by spirit, live Reiki, and count my blessings to a part of it all.
This blog is an expression of my encounters with art, Reiki, creativity, imagination and spirit.
Join 406 other followers