Karen, Judy and I met last week for the second exchange in our Talking Stick Art Doll Round Robin.  In our first exchange we swapped art doll heads and were challenged to create bodies for the heads.

Here is the art doll head I received in the first swap:

The bird head on the back represents an eagle.  On Native American talking sticks there is usually an eagle feather which represents courage and truth for the speaker.  I originally wanted to have the head rotate on a center dowel of wood but the head was too heavy so I added a neck to the original head and the curly-q top knot.  The “cloth” covering the body reminds me of Native American blankets.  The blue stones indicate to the speaker that the Great Spirit hears the message of her heart and the words she speaks.  The letter beads “T” and “S” stand for “talking stick.”

And here is the Talking Stick art doll I received in this second exchange. 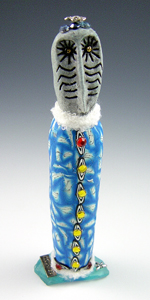 In the final step of this round robin, we are tasked with finishing the doll.  This could include adding arms, feet, a base, or anything else we can think of that will complete the doll.  I think this will be the most challenging part of the round robin.